Why is structuring a novel crucial?

It puts in place the footholds you need to reach the finish. There are so many different ways of approaching structure in a novel that it can seem overwhelming. Regardless of what method of creating a structure for your book you find easiest, there are seven essential elements that most successful novels have:

A beginning with strong hook

The beginning establishes the backdrop for the story and the normal situation for the protagonist(s). While the beginning may drop the reader into the middle of action, at some point, the story will fill in the details that allow a reader to piece together the ‘regular world’ of the story. This is necessary as a baseline for the rest of the story in which a disruption will occur and grow throughout the story. In the opening of the Harry Potter series, this would be Harry at home with his adoptive family, before the magical alternate world emerges.

The beginning also introduces the setting and the main characters. It establishes the voice of the story and the type of story that it is. It may introduce the main problem or foreshadow the trigger or disruption that will set the story in motion. For example, at the beginning of Star Wars, we see a frustrated and bored Luke Skywalker on the family farm. Little does he know that his desire to explore more of the galaxy is about to come true.

An intriguing trigger or disruption

This also has names such as the call to adventure or the inciting incident. Basically, it is the moment that something enters the story and changes the protagonist’s normal life. In Star Wars, this is the moment when Luke Skywalker receives the message Princess Leia has recorded for Obi-Wan Kenobi. The trigger for Harry Potter is his invitation to attend a school for magicians. In some cases, the story may even open as the trigger or disruption is occurring and works back from there, but even when the order of these structures is technically reversed, they serve the same purposes.

In at least one version of story structure and in some of those derived from it, there is often an initial refusal of this first call to adventure or disruption of ordinary life. Sometimes, it takes multiple disruptions for a person to enter the next structural stage.

Decisive new chapters: The point of no return 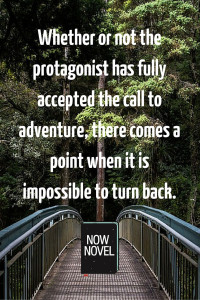 This is also known as crossing the threshold. Whether or not the protagonist has fully accepted the call to adventure, there comes a point when it is impossible to turn back. This happens literally in the first book of the Lord of the Rings series, The Fellowship of the Ring. Samwise Gamgee points out to Frodo that when they take one more step, they will be the furthest they have ever been from the Shire before. Note that ‘adventure’ does not have to be literal when you think about your story structure. You could be writing a character study about a family where no real ‘adventure’ takes place. But a similar event would be a character making a life-changing decision that affects him or her and loved ones – a relocation (an adventure of sorts), starting a new relationship (or ending one).

These first three elements generally occur in what is considered by writers using the three-act structure as the first act. This comprises about 25 percent of the book, and the point of no return often marks the end of the first act. Here is what most often follows, structurally:

From this point, the action will rise to the story’s climax. Following the initial point of no return, there will be a number of additional turning points related to the rising action. Some writers who study structure refer to this as “the rule of threes.” Often found in fairy tales, the rules of threes sees the protagonist trying to overcome obstacles a total of three times with two failures before the third successful try.

Challenges and turning points do not actually have to occur in any particular number, and how many of them there are will depend in part upon the length of the story, how many separate character arcs there are and more. However, this rising action and the resultant turning points will make up the bulk of the novel. In a three-act structure, they occur in what is roughly the middle 50 percent of the novel.

Reversals typically occur throughout the middle 50 percent of the story as well. They also happen as a result of rising action and challenges faced by the protagonist, but they deserve a separate heading because they tend to be more drastic changes in the narrative then mere turning points.

A reversal is exactly what it sounds like: the moment when everything changes completely. A major reversal often occurs just before the climax, either setting the stage for the climax or bringing the protagonist to the lowest point just as the biggest challenge of the novel has to be faced. Some writers also say that there needs to be a midpoint reversal although not every story will necessarily follow this pattern.

This last major reversal usually marks the end of the second act. Act three, which is roughly the final 25 percent of the novel, is made up of two major structural elements: 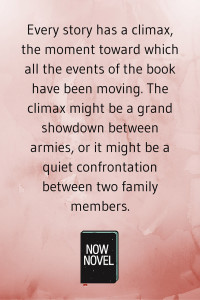 Every story has a climax, the moment toward which all the events of the book have been moving. The climax might be a grand showdown between armies, or it might be a quiet confrontation between two family members. What determines the climax is less the size of it and more the size of the effect that it will have on the world of the novel and, most importantly, the protagonist.

There are two common and related structural errors some writers make around the climax. One is to neglect the rising action, turning points and reversals and head straight for the climax. The other is to neglect the reversal shortly before the climax. Both tend to make the climax seem as though it has come out of nowhere. Whatever surprises may be planned for the reader in the climax, its groundwork must be set down early on and developed throughout the story.

The resolution or return is the end of the story. While it is generally best to wrap up a story fairly quickly after the climax, some stories require a more extended resolution than others. In some cases, as in some fantasy fiction, the protagonist makes a literal return to a place as part of the resolution. At the end of the Lord of the Rings trilogy, Frodo returns to the Shire and finds he has changed so much that he can no longer live in the Shire as he once did. This story, the arc of Frodo’s character and the theme of how difficult it can be for a person to return to their old life after a period of trauma or adventure requires a more leisurely resolution. Other stories require less development and exposition after the climax, and the resolution may be just a few pages or even just a few sentences.

It is said that every story has a beginning, a middle and an end. The statement seems obvious, but in fact, many beginning writers neglect one of these elements. Within this broad structure are other elements including the disruption, the point of no return, and the rising action. While specific models of story structure may differ, they all contain these main elements. Drill down to these basics while looking at more elaborate or detailed story structures. If you prefer not to do much planning ahead of time, keeping a mental map of the main elements of structure can help keep the story on track.