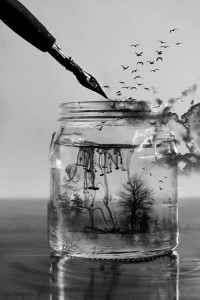 Writing wabi sabi is a concept borrowed from the Japanese that has to do with accepting impermanence and imperfection. Applying this concept to writing can lead to a way of seeing the world that results in greater creativity.

The words are difficult to translate directly because they express a state of being that we lack precise words for in English. However, in addition to impermanence and imperfection, they carry with them a sense of simplicity, of melancholy and of passing time. Designers, artists, writers and others have used wabi sabi principles in approaching their work since Leonard Koren published a book called Wabi-Sabi for Artists, Designers, Poets & Philosophers in 1994. Then in 2006, Richard R. Powell wrote Wabi Sabi for Writers. There are a number of ways that approaching writing with the wabi sabi mindset can address some challenges in the writing process.

The notion of imperfection is a particularly important one for writers for two reasons. One reason is that perfectionism will keep writers from starting or finishing a draft. The second is that accepting the notion of imperfection makes the process of editing more rewarding. A writer who accepts that a work can never be perfect is more likely to find a critique less trying than one who is continually striving toward an unreachable perfection.

The simplicity of wabi sabi is another notion writers can apply in more than one way. How a writer applies that simplicity depends on the nature of the work in progress. It may mean paring down a story and the prose to its essence. However, some stories need to be told in complex ways with complex prose. This does not necessarily conflict with the concept of wabi sabi if the writer keeps in mind that even a complex story or style of storytelling should be no more complicated than needed to best serve the needs of the work.

No matter what kind of book it is, simplicity can be helpful at the planning stage and again at the marketing stage. At some point in the planning of the novel, even writers who do not outline need to have an idea of what the book is going to be about. It can be helpful to strip the book down to its essence in a few sentences. In its simplest form, what is the book about? Later, if the writer plans to query agents and publishers, it will again be necessary to sum up the book in two or three unforgettable sentences. Again, keeping the simplicity of wabi sabi in mind will help with this distillation.

Wabi sabi is also a way of seeing the world that can inform fiction writing. Through wabi sabi, a writer learns to be sensitive to subtleties and to understand the interplay of light and dark. Wabi sabi means being neither overwhelmed by nor blind to the suffering in the world; through wabi sabi, a writer is aware of joy as well. Both sorrow and joy work together to form the complex skein of existence.

Writing is something that doesn’t begin or end with the actual act of writing. It is a way of seeing and understanding the world that the writer then takes back to story. Wabi sabi can illuminate our existence in a way that is particularly meaningful for a writer.

What is one way you might apply the concepts of wabi sabi in your own writing?