What is purple prose? It describes sentences that are too mannered and stylized. The Oxford English Dictionary defines purple prose as ‘writing that is too elaborate or ornate’. How can you distinguish between good writing and purple prose? Read tips to avoid purple prose in your own work:

1. Understand the difference between purple prose and complex writing

Because of everything negative that has been said about purple prose, many aspiring authors mistake this for meaning that the only good writing is simple.

The first thing to understand about purple prose is that it is not the same thing as prose that is complex, lyrical or experimental. Purple prose is writing that is unnecessarily wordy, uses metaphors and other figurative language badly, and draws attention to itself. It sticks out as over-elaborate in a way that detracts from the story.

‘Her voluminous follicles cascaded down her blushing epidermis of the neck, catching his desirous eye.’

A very ornate, pompous way to say that a character finds the way a characters hair gathers at the nape of her neck is attractive! A not-purple edit:

The way her hair hung across her bare neck caught his eye.’

Purple prose can also be prose that is inappropriate for the genre or type of scene that’s being described. At its worst, purple prose is unintentionally hilarious as evidenced by the success each year of the Bulwer-Lytton fiction contest that parodies the work of a nineteenth-century writer particularly known for his overly effusive writing.

So, how do you separate purple prose from poetic prose?

The problem with overly ornate or purple prose is it makes a story hard to read. If every other word is a scientific or antiquated word, writing becomes hard to wade through. If every other word has four or more syllables, it’s possible your writing will read as striving to be literary and purple.

When in doubt about a complex word, look it up in a dictionary. If it says ‘archaic’ next to it, think twice about using it in a contemporary setting where it will feel dated and will lend to a purple effect. Make sure sentences and paragraphs flow to create clear sense.

3. Ensure figurative language is appropriate to the tone and mood of a scene

If you are using figurative language, is it appropriate and consistent? Does it match the tone and mood of a scene?

For example, if you describe the way a character chews as being like bombs exploding, this might feel out of place in a simple, low-intensity family scene. Romantic scenes are particularly risky for purple prose. That’s because when we’re trying to describe intense emotions, we sometimes go overboard. 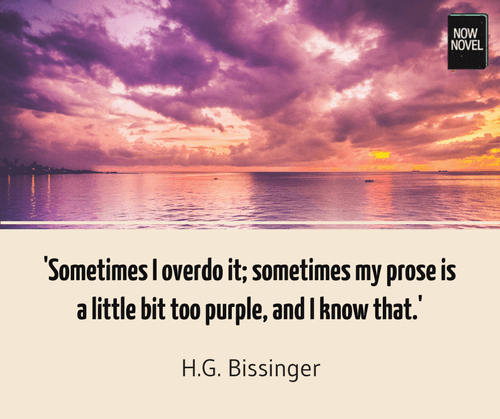 When you describe a character performing a daring stunt or a complex maneuver, are you in control? Be honest here. Is your language achieving what you want it to achieve? Does every word serve a purpose? If you are describing an action, is the action possible as you’ve described it?

For example, you could write a scene where a character is shot and falls to the ground thus:

‘She clutched her heart in a paroxysm of terror and, gasping like a fish hauled suddenly into the air by a mean hook, fell ashen to the ground with a resounding thud.’

Yet this description is overdone and melodramatic. It’s purple because we have over-complicated description like ‘paroxysm of terror’, along with a confusion of imagery (a fish being hauled into the air and a falling motion).

‘She pressed her hand to her heart, gasping and afraid, and fell to the ground, already turning ashen.’

5. Read authors who are poetic without using purple prose

One way to help you understand the difference between purple prose and poetic but stylistically effective writing is to read writers who are masters of style.

Writers such as Cormac McCarthy and Michael Chabon are excellent examples of contemporary writers who have distinctive styles but write strong prose. Take a look, too, at the work of twentieth-century writers such as Ray Bradbury, William Faulkner and Vladimir Nabokov.

A good exercise might be to read passages from each of these writers and ask yourself the questions from above. Note how each writer handles things like figurative language and unusual word choices. Note too that while writers like McCarthy and Faulkner can sometimes be challenging for the reader on a prose level, they remain in control and their stylistic choices serve a purpose within the world of the story. Making the reader do a little bit of work is not the same thing as writing purple prose.

Putting the story first is a key way to eliminate purple prose. Sometimes we try to sound literary or ‘writerly’ because we don’t have a clear idea of character motivations or plot.

Purple prose can also result from the effort to shore up weak writing and weak verb choices in particular.

Let’s imagine you want to get a grieving character from one side of the room to the other. Saying the character ‘walked’ doesn’t tell us very much. Therefore, you may find yourself tempted to throw in some figurative language. Maybe the character walked like an orphaned, bellowing lion cub in search of its dead mother, but that sounds terribly overwrought, and what does it mean? How does a human bellow like a lion cub? Have you ever heard a lion cub bellow?

A stronger verb would convey your meaning better. If you’re trying to move your character across the room in a fit of grief, you might have the character stagger, shuffle or even crawl depending on how profound that grief is. These concrete, descriptive verbs convey the meaning that you need.

Get help improving your writing: Find out about Now Novel’s short and comprehensive writing courses.

6 replies on “What is purple prose? Definition, examples and how to avoid”

Thanks for the suggestions, especially the one regarding verb choice. I’m struggling with the first paragraph of my novel. I want to convey meaning and intensity so I find myself adding similes. As you mention, similes often require too much decoding and remind readers they’re reading. You know what, I’m going to go back to word choice, take out all figurative language, and see what I can do!

Great plan. Another thing I’d do is not worry too much about your first paragraph until you’ve got your whole story mapped out. Its easy to go back and edit and tweak, but its more important to plough on with your story. Good luck!

I don’t know that I agree. I guess it depends on how you interpret some of these guidelines. Sometimes, you want the language to be a focus. You want the reader to notice not only what you’re saying, but how. Sometimes you may even want them to stop and think about the language you’re using.

A non-fantasy example of this is Nabokov’s “Lolita.” In that book, the clever word play Nabokov uses, through his narrator, is part of the allure of the book. There are plenty of times as a reader you stop and think about the language itself, as well you should. For a fantasy example, think of Peake’s “Gormenghast” books. Here, too, how Peake says what he says is part of what makes the books brilliant. There are plenty of times that I stopped to think about the language, and I was pleased to do it. If Cormac McCarthy or (to use a fantasy example) Joe Abercrombie had written the Gormenghast books, they’d be terrible. I use those two authors as examples because I like both of them A lot. Abercrombie is one of the best we have going in fantasy right now. But his style isn’t Peake’s style, and it would be a mistake to think that advice regarding purple prose that fits into an Abercrombie work would also improve Peake. It would not. Think, too, of writers like Steven Erikson, Angela Carter, Caitlin Kiernan, and more.

I guess it all comes down to a subjective line we each have. If you’ve got a more expressive style that some would deem ‘purple,’ I say go with it, and develop your voice. Maybe you call attention to language in your writing. That’s fine. You’re in good company.

[…] “But this is without a doubt the best bit of writing I’ve produced in my entire life. Look at how brilliant and deep and symbolic and powerful! If paragraphs could win the Nobel Prize, this would win.” Sure, sure. But it’s not adding anything to the plot, and you’re so blindingly in love with it, there’s a good chance its poetic ‘brilliance’ resonates more with you than your reader. Axe it. » Further reading: Purple prose, how to recognize and tame it […]

[…] What is purple prose? Definition, examples and how to avoid https://exploringyourmind.com/psychology-of-advertising/ […]

Join a free webinar on Wed 24 Aug with Romy Sommer on common writing errors and how to avoid them.