Why do authors write dystopian fiction? A dystopia is an inherently interesting setting. Strife-riddled worlds provide strong backdrops for characters’ fears and motivations. They provide testing grounds for acts of bravery or cowardice, and for stories of tragedy as well as hope.

3. Think about what’s next

7. Include principles of behaviour

9. Imagine the role of the Big Other

Before we explore each of these ideas, let’s define dystopian fiction:

What is dystopian fiction?

An imagined state or society in which there is great suffering or injustice, typically one that is totalitarian or post-apocalyptic.

Definition via Lexico powered by Oxford

An earlier Oxford definition from the 1980s describes a dystopia as a place where life, on balance, is bad.

In this earlier definition, a dystopian story imagines a place, society, environment or political situation we would want to avoid. Because said place promises personal or collective suffering, danger or loss of freedom.

Examples of dystopias in fiction

There are many examples of dystopian places in fiction.

In Fahrenheit 451 (1953), Ray Bradbury imagined a future American society where books are banned. Under this extreme censorship, ‘firemen’ are required to burn any book found.

In a more recent example, Stephen King’s The Institute (2019) imagines a society where gifted children are kidnapped with the aim of extracting their powers.

Let’s dive into the 9 tips:

Every place, every situation, has a backstory.

When the novel Coronavirus disease (COVID-19) first emerged in 2019, before it became a pandemic, many of the first news articles focused on theories of origin.

Where did the disease originate? Where did it first leap from suspected animal hosts to humans?

Finding out origins is a key step in understanding causes and impacts.

Knowing the first signs of trouble will give your dystopia a sense of history.

Your story doesn’t have to immediately (or ever) make the origins of your dystopia known. This element could remain mysterious. Yet having an underlying idea of this will help you decide where your dystopia comes from and how it evolves.

In Bradbury’s novel, the main antagonist, Captain Beatty, orders the burning of books due to his dislike of their contradictions of fact and opinion.

The origins of a dystopia in the story thus lie in a character’s beliefs or ideology.

Beatty believes the world will be better without books. He gives contradictions of fact and opinion a negative rather than positive or neutral value (whereas a person could argue, as Socrates did, that disagreements and contradictions are essential steps towards truth).

Dystopias in fiction (as in the world) arise from diverse circumstances. Besides dangerous ideologies such as banning books, or leaders’ demands for only one, global religion, they may arise from:

These are just some examples of dystopian origins. 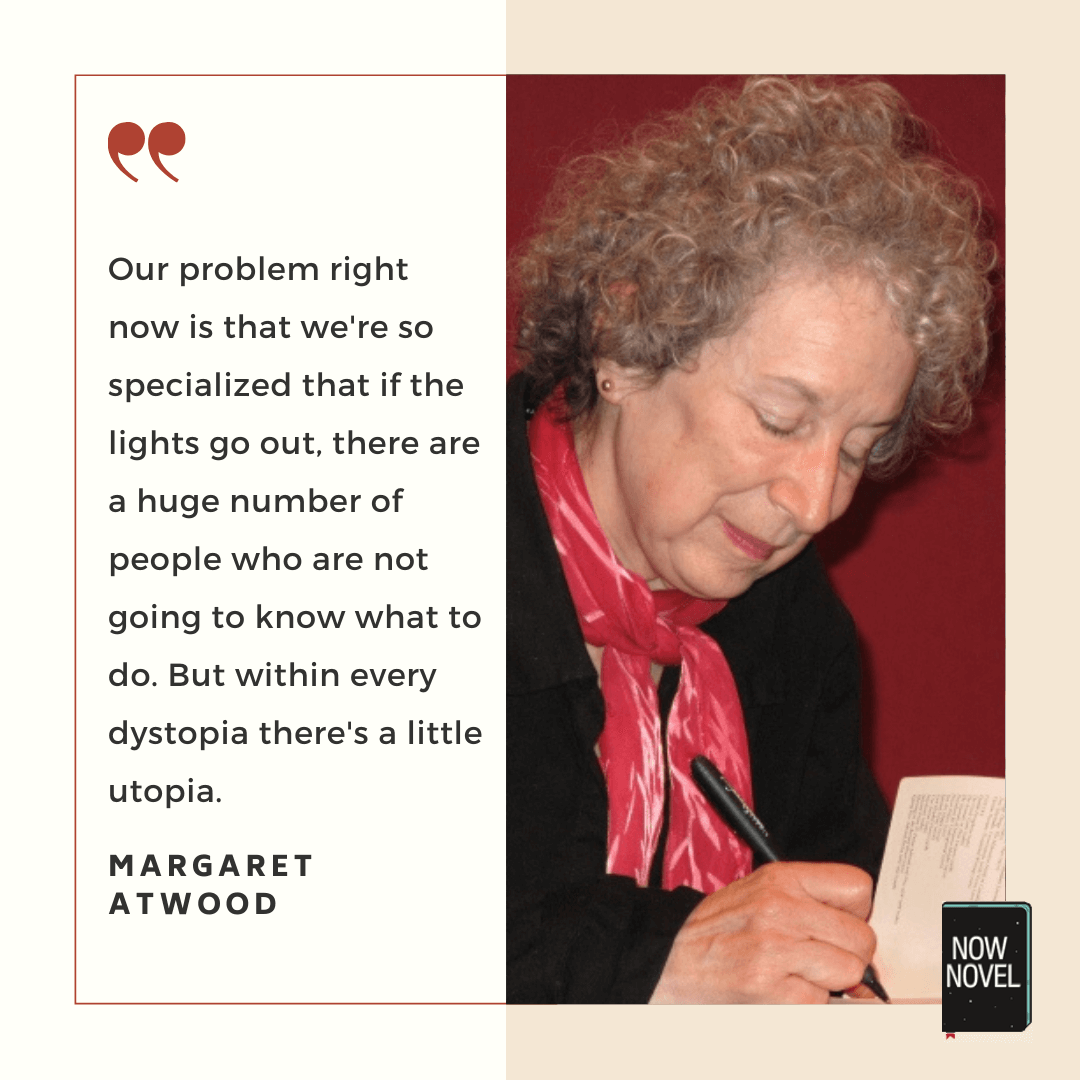 Many post-apocalyptic and dystopian stories imagine what survives after a catastrophic event or under an oppressive tyranny.

In Bradbury’s novel, for example, which books endure and why?

It transpires in the story that Beatty is (ironically, hypocritically) harboring his own private collection of books.

Part of imagining a dystopian future means picturing what remnants of the past remain, and why.

Things that may endure for your characters include:

3. Think about what’s next

Learning how to write dystopian fiction means thinking about different scales of time and history.

What happens in the first days of a tyrannical regime, versus the last? How do people react to the early days of a pandemic, versus its peak?

What would be the first sign of increasing surveillance in a society where the government wants to know your every move for darker purposes?

As an exercise, create a timeline of events that shows milestones in your dystopia developing against month or year in your story. 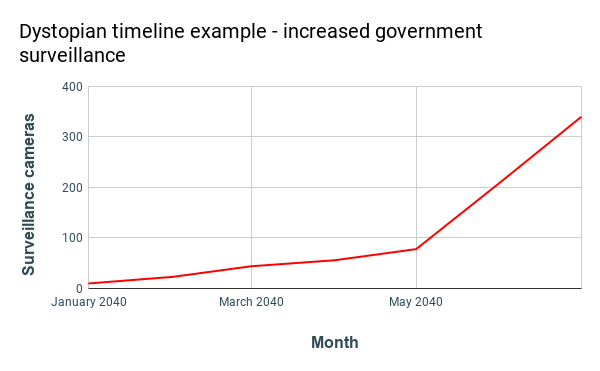 In a story setting altered by the ravages of a major climate event, pandemic or other dystopian circumstance, what is the ‘new normal’?

Think about how people have been encouraged, for example, to bump elbows rather than shake hands (or forego contact altogether) to help flatten the curve of new COVID-19 cases.

A dystopian situation radically alters life. Imagine how acts now made ordinary might evolve, too.

Perhaps characters who bump elbows to say hello out of necessity develop a phrase or other gesture to go along with this ‘new normal’, for example.

In time, in a fictional world, people may even still greet this way, after the original risk has passed. Present-time necessities may, in time, become culture.

In a dystopian scenario, the bizarre or outrageous – knife-point fights over necessities such as toilet paper, for example – may become almost commonplace.

Learning how to write dystopian fiction also requires finding the extraordinary and unusual.

If a tyrannical regime keeps a detailed docket on every citizen, for example, what do the regime’s most complicit, obedient members do with this information? And what do opponents do to safeguard it?

What extraordinary gestures, rule-breaking acts, are possible in your dystopian world? What do such acts cost your characters?

Dystopian fiction often involves settings where there are new constraints and limits.

For example, maybe characters cannot leave an artificial habitat because of hazardous waste in the outer regions.

What constraints or limitations does your dystopian setting impose? What is in short supply due to these constraints – food and basic sustenance, or more abstract comforts such as privacy? 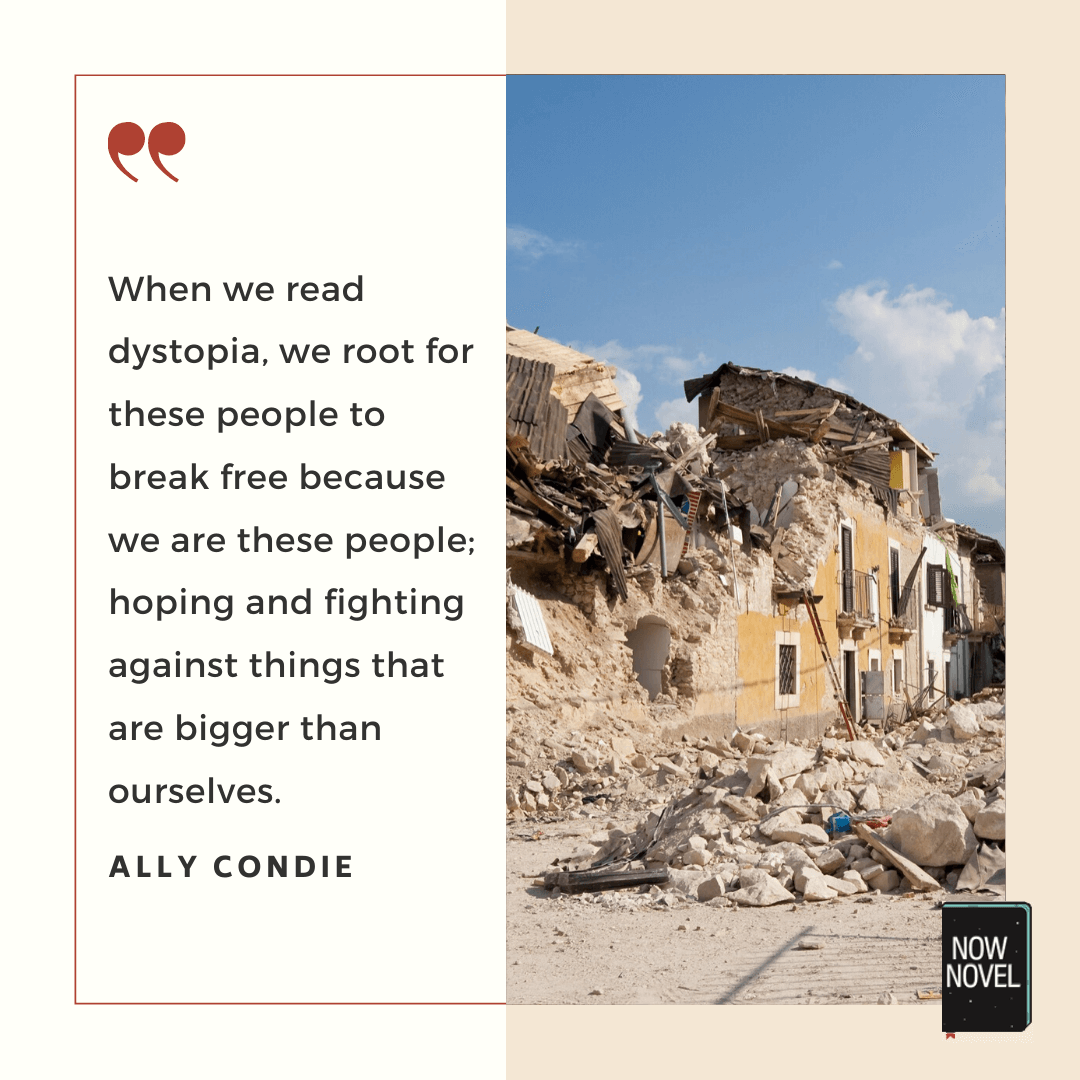 7. Include principles of behaviour

In a post-apocalyptic setting, people’s actions may be altered by principles such as:

Reading about dystopian scenarios, such as prisoner behavior in wartime camps, is heavy going but is also illustrative of human behaviour. For every informant, accomplice, betrayer, there may exist a friend, ally or hero.

Think about what might drive a character to choose a specific course of action when living under dystopian duress.

Rather than glorify bleak misery, or wallow in imagery of dystopian deprivation or excess, great dystopian stories ask interesting questions.

For example, in Fahrenheit 451, Bradbury’s imagines what it would take ‘firemen’ (the task team charged with burning all books) to realize they are being complicit in something ethically wrong.

If censorship is the norm, how does a character learn how to question, to seek information, to dissent?

Remember to ask ‘who’, ‘what’, ‘why’, ‘where’ and ‘when’ as you explore what makes your fictional dystopia develop.

9. Imagine the role of the Big Other

In critical theory, the ‘Big Other’ describes an entity (for example the government, or society) that compels us to make choices (for example to ‘be a responsible citizen’ and vote, or to obey a law even if it isn’t strongly enforced).

A simplified explanation of this concept:

The simplest way of putting it is that the Big Other is the inner voice that reminds you of what society would think about what you’re doing. So the big other has a tyrannical function, to keep you in line with society.

In George Orwell’s 1984, ‘Big Brother’ (the high-surveillance state) is this Big Other. Orwell’s tyrannical government compels people to obey through the knowledge of their own surveillance. An external threat becomes an ‘inner voice’.

In a dystopian society, some people may comply with the Big Other because it benefits them (financially, emotionally, or for other reasons) to do so. Others might rebel or resist.

Think about this element in your dystopian fictional world. Who among your characters is determined to obey the Big Other and who is more hostile towards it, and why?

Get help outlining your own dystopian story and feedback from a constructive peer critique community.