In classic stories, characters often step off the page from their first introduction, fully realized. How do you write good character description that reveals enough to hook readers? Try these 5 techniques:

1. Give character description via action

Writer’s who are still developing their craft often give ‘laundry list’ description. This is where a character’s physical attributes appear in a list, such as:

‘She had green eyes, long, tawny hair, a scruffy tracksuit that was stained, and a loud laugh.’

This may not be terrible, as far as descriptions go. Yet when you introduce every character using a list of what attributes they have, we start to see the author’s presence behind the story’s stage curtains.

One way to vary your character descriptions is to drop in descriptive details during actions. For example, for the same character above, we could write:

She looked up from dusting fallen lunch off her scruffy tracksuit, and gazed across the university cafeteria, towards where I was sitting, trying not to stand out. In that moment I noticed how piercing her green eyes were.

Here, a narrating character’s in-the-moment perception of another character’s actions drops in descriptive elements. It also, at the same time, reveals a little about the observer.

2. Use figurative language such as simile and metaphor

Figurative language such as simile (comparing objects using ‘like’ or ‘as though’) and metaphor (stating two unlike objects are the same) is effective for describing subtle precise qualities and appearances. For example:

His dopey expression made him look as though he was always half-sedated.

Her thin, uptight mouth was a door on a latch, poised to shut fast at any sign of trouble or disagreement and stay that way ’til the coast was clear.

The second (a metaphor) gives us associations by stating one thing is another. The stand-in object (the latched door) tells us something about the first, the character’s mouth (in this case, the image suggests a mistrustful and conflict-averse person).

Get a practical workbook with description writing exercises plus helpful videos. 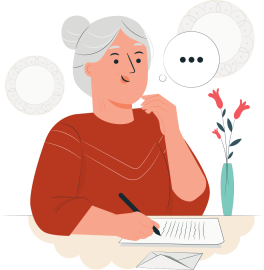 3. Use physical details for personality, not only visuals

A common feature of amateur writing is to over-rely on describing eye and hair colour.

Using these physical details doesn’t tell us much about a person, beyond personality elements revealed by details such as what sort of haircut the person has. (For example, a quirky, avant-garde hairstyle could suggest a creative, edgy or bohemian personality.)

Examples of facial description with personality

Her peroxide job has gone wrong, so that her hair has turned a strange yellow colour, standing out in angry spikes from her head. But more than this, something has changed inside her, which you can see from a long way off. She seems to burn with a luminous white light. Her face is knotted and anxious, bunched in on itself, and it takes her a long time to notice him.

Two of the boys wore glasses, curiously enough the same kind: tiny, old-fashioned, with round steel rims. The larger of the two – and he was quite large, well over six feet – was dark-haired, with a square jaw and coarse, pale skin. He might have been handsome had his features been less set, or his eyes, behind the glasses, less expressionless and blank.

Each of these examples gives an idea of character, of who the people are.

Galgut’s example describes his narrator’s volatile friend whom he travels with in India. The description gives clues to her personality. Her changeable nature (frequent hair dyeing), the intensity of her emotions (‘angry spikes’ and her seeming ‘to burn’). Her face is ‘bunched in on itself’ and ‘knotted and anxious’. The overarching, immediate effect is of a troubled, vulnerable and scattered person.

Tartt’s character description conveys the world her characters inhabit. As classics students, they have a love of the old-fashioned. Tartt also uses shadowy suppositions (one ‘might have been handsome’) to layer personality over immediate appearance. Her descriptions show how mannerisms, facial expressions, and personal tics modify the raw physical facts of people’s appearances.

A big part of how to write good character descriptions is understanding how physical appearance combines with movement, habits and tics. For example, a character may be beautiful, but roll theirs eyes constantly. This gives them a sullen, negative appearance that limits others’ awareness of their beauty.

In English, we have urban slang terms such as ‘resting bitch face’ (to describe someone whose neutral facial expression looks mean). These suggest how small details such as the faces we often make can shape our impressions of people. Sometimes accurately, sometimes misleadingly.

Movement and gesture in physical description can thus surprise readers. People aren’t always what they first appear. A very elderly lady seated at a restaurant table might surprise the reader when she stands up and strides across the room. We’re surprised by the strength and energy that gives her the aura of a person thirty years younger.

Think of what movement can suggest about characters. The example above could indicate, for example, that the lady was a professional ballet dancer for 30 years. Her description shows she has good posture and other physical benefits of years of dance with her. Her movement itself tells a story.

5. Use character description to reveal the observer, too

Good character description often tells us about more than the person described. It tells us something about the viewpoint narrator doing the describing, too. For example, it could tell us:

Consider these examples where one character’s description of another reveals a little about the describer:

My sister, Mrs. Joe Gargery, was more than twenty years older than I, and had established a great reputation with herself and the neighbours because she had brought me up “by hand.” Having at that time to find out for myself what that expression meant, and knowing her to have a hard and heavy hand, and to be much in the habit of laying it upon her husband as well as upon me, I supposed that Joe Gargery and I were both brought up by hand.

The waitress had a black dress and a white cap and eyebrows plucked to thin curves, and a red mouth shiny as jam. She called my father Captain Chase and he called her Agnes. By this, and by the way he leaned his elbows on the table, I realized he must already be familiar with this place.
Agnes said was this his little girl, and how sweet; she threw me a glance of dislike. She brought him his coffee almost immediately, wobbling a little on her high heels, and when she set it down she touched his hand briefly.

How character descriptions reveal the narrator

In the first example, the lead character of Dickens’ famous coming-of-age novel, Pip, describes his sister. The way Pip describes Mrs Joe reveals the retrospective insight he’s gained with age. It also reveals his wry, subtle sense of humour about the past.

Pip’s description reveals his younger self’s relative ignorance (he doesn’t understand the expression ‘to raise by hand’). It also reveals he is aware of how mean his sister was, letting everyone know raising him was such a chore.

Yet while Pip describes Mrs Joe’s tough, somewhat unloving character, he does so with characterful wry humour, too. For example, in how he jokes that Mrs Joe also ‘raised [her husband] by hand’ because she would hit both him and Pip. This mix of honest reflection and making light of the situation suggests the wisdom, forgiveness and perspective that may come with age.

Iris’s description of getting a soda with her father in Margaret Atwood’s The Blind Assassin conveys the perspective of a child in the process of losing her innocence. Her description of the waitress’s over-familiar gestures shows a child’s dawning realization of adults’ (mis)behaviours.

Atwood shows Iris at a moment when she is recognizing the double-ness of people’s words and actions (the waitress calling her ‘sweet’ to butter up her father, while covertly also looking at her with dislike). The scene is just as revealing of the process of Iris’s ‘growing up’ as it is of the characters she describes.

7 replies on “How do you write good character description? 5 techniques”

This was help full but you could make ten instead of five parts to the help.

Thank you for the suggestion, Kian, we may do so soon. Thanks for reading our blog!

Thanks for the information.

It’s a pleasure, Pavani. Thank you for reading.

Oh my gosh, such fantastic advice and tips. At some point, I started to write just a description of the face of a main character . . . 6 pages later! . . . I’ve just written almost an entire chapter which had never even entered my mind when jotting down scenes and ideas within the story . . . I’m so glad I saw your blog! Thank you!