Great dialogue involves your reader or viewer in a conversation completely. Read 10 tips from movie dialogue pros, from Hitchcock to Mamet and others:

In beginners’ dialogue, characters often read like floating talking heads in a void. The acclaimed director and producer Alfred Hitchcock emphasized the importance of visual elements in dialogue:

Dialogue should simply be a sound among other sounds, just something that comes out of the mouths of people whose eyes tell the story in visual terms.

When you write dialogue ask:

Memorable movie dialogue, those lines that film fanatics love to quote (such as Rhett Buttler’s ‘Frankly, my dear, I don’t give a damn’ in 1939’s Gone with the Wind), is mostly made up of ordinary, plain language. Yet it is where dialogue is placed, how ordinary words are arranged, that gives it power.

For example, the above line gives Rhett Butler’s final words to Scarlett O’Hara, when she tearfully asks ‘Where shall I go? What shall I do?’. It’s a brutal response. The final gesture of severing ties shows total indifference, with the strongest curse word kept for last. Timing and placement of this dialogue amplify its dramatic effect.

The French writer and director Robert Bresson gives this advice:

The most ordinary word, when put into place, suddenly acquires brilliance. That is the brilliance with which your images must shine.

See your film as a combination of lines and of volumes in movement apart from what it represents and signifies … To move people not with images likely to move us, but with relations of images that render them both alive and moving.

In addition to using movement, gesture, facial expression and other details, ask, ‘What is the occasion for this conversation?’ Is one character consoling another? Are bank robbers planning a heist?

Making dialogue build towards further action gives it an underlying sense of purpose and momentum.

A movie is a juxtaposition of images. We don’t need dialogue in a movie. Never. How do we know? Because when we’re on the airplane, we’re looking across at the other guy in the next seat watching a movie and we get fascinated. We can’t hear the dialogue.

In a novel, of course, the reader is not looking over someone’s shoulder watching a film. Yet you can write dialogue that contains the visual and action elements that create this effect, that get readers fascinated.

In an interview for SiriusXM, screenwriter and director Quentin Tarantino describes how he’d go to the movies and write dialogue scenes from memory:

I would go and watch a movie and then I could remember the scene … I’d go home and write the scene down and whatever I didn’t remember I’d fill in the blanks myself.

Copying out dialogue from memory this way is also an exercise you can do with good dialogue in books. Then compare your ‘filled-in’ version to the original. What is different? What made the original particularly effective?

Truly examining and internalizing skilled dialogue this way will help your craft. 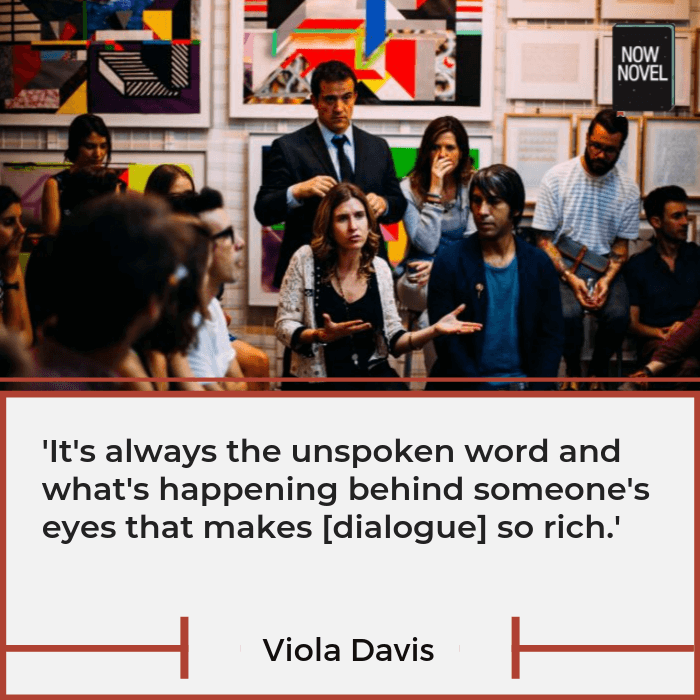 Dialogue is a powerful writing device because it can say more than the words characters hear. What is the underlying situation leading to a conversation? Could there be tension between what a character says and what they are privately thinking or feeling? How could you show this inner conflict?

Actors are founts of insight into writing true dialogue. Because they know how to bring a character to life – how to turn words on the page into a living, flesh-and-blood person.

Actress Viola Davis (who has won the so-called ‘triple crown’ of acting – an Oscar, Emmy and Tony) puts subtext thus:

Your internal dialogue has got to be different from what you say. And, you know, in film, hopefully that registers and speaks volumes. It’s always the unspoken word and what’s happening behind someone’s eyes that makes it so rich.

6. Know your characters inside out

Great dialogue begins with knowing your characters well. What are their:

Lawrence Konner, screenwriter behind TV hits such as The Sopranos, gives this advice:

I think the first thing you should do before writing a script is to sit down and write a biography of that person.

Create a detailed character profile for each character in your story using the easy step-by-step prompts in our story outlining tool.

7. Structure dialogue around set-ups and payoffs

Brilliant dialogue is often like a well-executed joke in structure. There’s a preamble and a punchline, though in a tragedy the punchline may provoke tears rather than laughter, as screenwriter John August says.

I suddenly recognized that all writing is like writing a joke. There is a set-up, and there is a payoff […] The set-up is extraordinarily important, and you can’t get to the punchline until you’ve established all the points along the way.

John August, interview for The Oscars

Think back to the example from Gone with the Wind:

Scarlett: What shall I do? Where shall I go?

Rhett: Frankly, my dear, I don’t give a damn.

Scarlett’s questions set up the response. Rhett’s reply is similar to a punchline in that there is an element of surprise (in that it doesn’t address the what and where of Scarlett’s question). It nonetheless also continues the thread of what Scarlett said.

8. Use silence and pauses, too

In effective dialogue, moments of pause, silence, interruption also speak volumes. What questions does a character respond to? When do they fall silent? Why? Punctuating dialogue with moments of tension and unease also helps to up suspense.

Screenwriter and film-making lecturer Susan Kouguell, in an article for Script Magazine, puts it thus:

Consider the silences and pauses your characters use, or another character’s interruptions, to further convey tensions, actions, moods, and emotions.

9. Say your dialogue out loud

Whether you’re writing movie dialogue or dialogue for a book, saying your dialogue out loud is classic advice many writers give. Aaron Sorkin, who won the Academy Award for Best Adapted Screenplay for The Social Network, told Collider this:

10. Play and enjoy writing dialogue in your voice

When asked about writing dialogue for her indie movie success Juno, Diablo Cody described what she learned about screenwriting, and dialogue specifically:

[When writing Juno] I was just having fun, and you can hear I was having fun. And in a way, I was having too much fun, if that makes any sense. I needed to be pulled back a little. When I watch it now, the dialogue seems very self-indulgent and undisciplined. But that’s one of the things people like about the film, so I can’t argue.

Coming up with original dialogue for my antagonists. Whew. I don’t want them to say things people will expect, so the wheels turn slow like there’s gum in there. Also, it’s a novel not a screen play. Most dialogue articles are for screen plays. :/

Have you tried reading dialogue out loud as you write? It always helps me catch out words and phrases that just don’t sit right.

I hope the wheels turn faster!

Thank you for replying. 🙂 That Isn’t going to work, I’m mostly deaf. I need a way to spot it my eyes.

Ah OK. Well I’d suggest reading screen plays that have great dialogue for ideas. Note down how the writer develops the character using dialogue. How often do the speakers interrupt each other? What additional cues are there for how they should deliver a line? Sometimes these can be very helpful. Best of luck!

I’m hard of hearing so … I’ll just have keep reading and thinking about what makes dialogue good.

essentially creating dialogue for my opponents. Whew. The wheels revolve slowly, as if there is gum in them, as I don’t want them to say things that people will expect listening. Moreover, it’s a novel, not a play. Almost majority of dialogue articles are really for movies.

Hi Chotaamritkala, thank you for your feedback and for sharing about your dialogue writing. To your concerns, I would say that sometimes characters do say what people would expect, say the obvious, the trite or cliché. So play with that, with expectation and surprise. Also the distinction is maybe moot between dialogue for a novel vs a play (or film). Although there may be different conventions in how it’s written, all dialogue is for the ear ultimately since spoken words are sound. Reading dialogue aloud is useful, whatever medium your story is in (it helps to catch unnatural dialogue).

If you want to write dialogue that people don’t expect, I would think about what each character’s own personal frame of reference and associations is. For example, what phrase or comparison would offend someone that wouldn’t offend another? What are their triggers or touchy areas? I hope these additional questions are helpful.